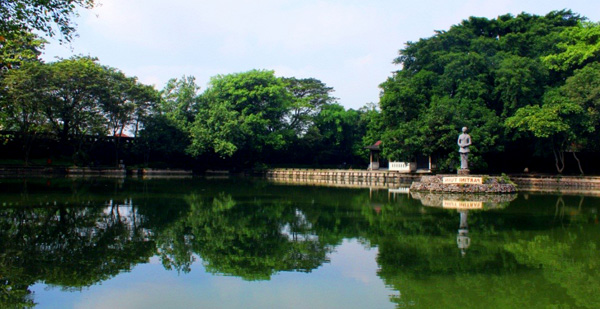 A vacation retreat in Dieng Plateau should be everyone’s choice for the next holiday. Featuring many options of nature attractions, Dieng never ceases to amaze tourists. Here is a reference. The name is Balekambang Lake and it belongs to Batur Sub-district. To be exact, the lake is situated in Dieng Kulon Village, and it resides near to Arjuna Temple. Even though it is less popular than other lakes in Dieng, Balekambang is a place that tourists should never overlook. Thanks to its strategic location. People keep coming to the site after they explore nearby temples.

The Nuance
The size of the lake is about 10 hectares and most parts of it are undergoing siltation. In fact, more grasses cover some parts of the lake gradually. Due to such problems, people consider it a puddle instead of a lake. The reason is the size is not as great as its siblings. Despite the fact, it provides lots of benefits to the environment and the locals, especially in tourism industry. Even it became a significant water reservoir and prevented excessive water from getting in Arjuna Temple during heavy rain.

Exploring Balekambang Lake
Located near to famous Arjuna Temple and local farms, Balekambang Lake becomes a nice spot to enjoy an adventure and small trekking. Visitors can even visit different sightseeing spots like Sikidang Crater and Ratapan Angin in order to enjoy better views of the lake. The most recommended spot is Dieng Plateau Theater, though. Of course, tourists must spend more time and effort in reaching those spots. The fact is their effort won’t be a waste, as the views are rewarding. It is, somehow, becomes a nice object for photography.

The next fun activity to do is fishing! Both the locals and tourists are allowed to fish in the lake, as long as they have prepared the equipment beforehand. Some big freshwater fishes are seen in the lake, and they keep luring those who love fishing. For tourists, this kind of activity can be their opportunity to get closer to the villagers too. They can even share fishing experience and stories to each other. For lucky ones, some locals may invite them to their house, grill the fishes, and eat together!

Apart from its unique charm, Balekambang Lake is considered historical. It got its name from the legendary small island that floats on an ancient lake. Due to its soft texture, it is called “Bale” (bed). Also, it floats easily on water and people gave another name, which is Kambang (float). Knowing the history and sacredness of the lake, many villagers still do a traditional ritual like meditation during Islamic New Year (Suro). They sit by the lake and unite with nature, wishing both wellness and luck in life.

How to Get There
From Wonosobo City, travelers can take either a car or minibus to Batur Sub-District. Next, they need to head to Dieng Kulon Village and reach Arjuna Temple. This trip takes about 1 hour and the distance is 25.9 km. As for the best route, it is definitely Dieng Raya Street. From the temple, they can simply walk to the lake, passing through a small hill and local farms.