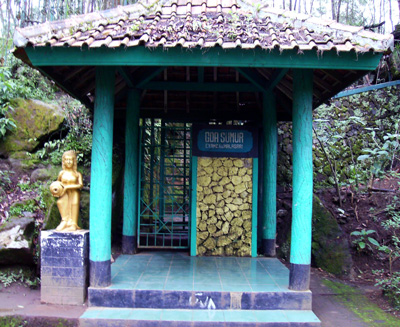 Dieng Plateau is known for its nature beauty like mountains and lakes. The fact is that it also has several sacred caves, which are located near to Warna Lake. One of them is Sumur Eyang Kumulasari, residing near to a famous cave called Semar. Not only it is famous among the locals, foreigners also often come to the location to feel its mystical nuance. Some also visit the cave to do a ritual like meditation and pilgrimage. Regardless of the purposes, tourists keep coming to the site as it becomes quite inseparable to Semar Cave and Warna Lake. In other words, tourists can enjoy three different tourist spots in one go.

The Nuance
As mentioned earlier, Sumur Eyang Kumulasari Cave is located near to Semar Cave. The most recognizable feature is the statue of a woman carrying a jug, which resides in front of the mouth of the cave. Also, there is a small pond located near to it. The rumor has it that the pond has a healing effect for numerous types of skin diseases. The locals even believe the water can help women to retain their beauty. Another use of the water is for different sacred rituals (Mabakti and Muspre), especially done by Hindu people. As for tourists, the cave simply becomes a great place to spend a holiday.

Exploring Sumur Eyang Kumulasari Cave
In order to reach the cave, visitors must pass through a challenging route. It is because the cave resides under a big rock so the location is a bit concealed and difficult to reach. Inside, there is a place for meditating just like that of Semar Cave. Below, visitors might see a small pond or a well that comes with a crystal clear water. The locals named it Tirta Prawitasari – the sacred water. The fact is visitors are allowed to wash their face and hands with the water as long as they don’t spoil it with trash or other harmful things.

Tourists can even conduct a meditation in Sumur Eyang Kumulasari Cave. The only requirement is that they must come with Kuncen (the local keeper). That man may help them to enter the cave and tell some story about it. He is also the one who holds the main key to enter it, after all. That means no one can enter the cave without the presence of Kuncen. In this case, good knowledge of the Indonesian Language is required in order to communicate well with him.

According to the legend, there was once Kumalasari the Goddess who lived in that site. The locals discovered and started worshipping her. It is also said the well or pond became her favorite spot for bathing, emitting her power and aura. No wonder, the locals consider it sacred and important.

How to Get There
The best checkpoint to reach Sumur Eyang Kumulasari Cave is Warna Lake. For those coming from Wonosobo City, their destination is Dieng Wetan Village. Once they get to the lake, it requires a bit trekking to reach the site.