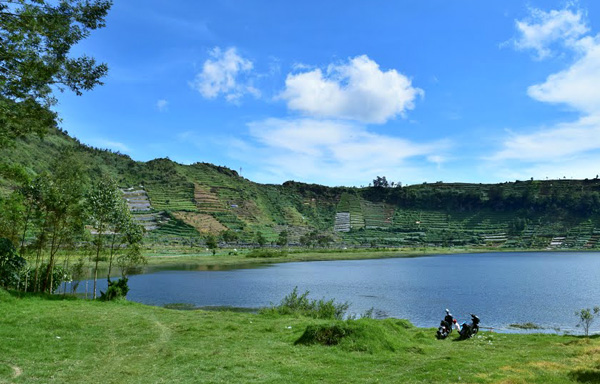 It is common knowledge. Dieng Plateau has many options of lakes to visit and one of them is called Merdada Lake, which resides in Karangtengah Village. It belongs to Batur Sub-district and becomes one of the biggest lakes in Wonosobo District. Due to its popularity, it has been included in the list of primary tourist spots of Dieng Plateau. No wonder, visitors keep coming to the site and enjoy a worthy vacation either during workday or weekend. Even though it is quite famous, some travelers have difficulties in reaching the location and learn some information regarding the lake. So, what is it about?

The Nuance
Being one of the biggest lakes in Dieng Plateau, Merdada looks quite majestic. It has the measurement of 15 hectares, surrounded by hills and lucrative plants. Above all, the water is fresh and pristine. With all those features, visitors are likely to enter the water and feel its soothing water. Even swimming is allowed, especially for those with good skills. The lake is deep, so it is not suitable for kids or beginners. As an alternative, visitors can sit and relax by the lake and enjoy its mesmerizing beauty! Somehow, it is also relaxing.

Exploring Merdada Lake
Apart from its size, tourists have many reasons in visiting Merdada Lake. For example, they want to appreciate its unique shape, which is similar to a giant bowl. It is said the lake was formed due to the explosion of Dieng Mountain back then. Being affected by such great blast, the land turned into a giant crater and was filled with water over time. The locals even believe it as the biggest lake in Dieng Plateau, as compared to others. In fact, it takes much time to get around the lake!

Thanks to its stunning landscape. Photography is common in Merdada Lake and almost all visitors carry their camera when visiting the site. Due to its size, the lake offers many recommended spots to take pictures, as well. The best one is either by the lake water or nearby hills. The second option offers broader landscape, but it takes much effort to reach that spot. It gives everyone the chance to do trekking, though. What they need are a good stamina and comfortable shoes. Plus, the route to reach the top of the hill isn’t even that hard.

What’s next? Another recommended activity is a boat riding. Some locals offer a boat service to tourists and it comes at a cheap price. This way, everyone can enjoy riding the boat and explore the lake comfortably. They might also meet the locals who look for fishes on the lake. What a sight! With all those interesting charms of Merdada Lake, no one would regret visiting it. Despite its secluded location, it is definitely a worthy tourist spot to visit.

How to Get There
Merdada Lake resides in Karangtengah Village and it belongs to Batur Sub-district. From Wonosobo City, the trip may take about 1 hour and the distance is 28.8 km. Travelers can simply take Dieng Raya Street, which is the fastest route to reach the site.