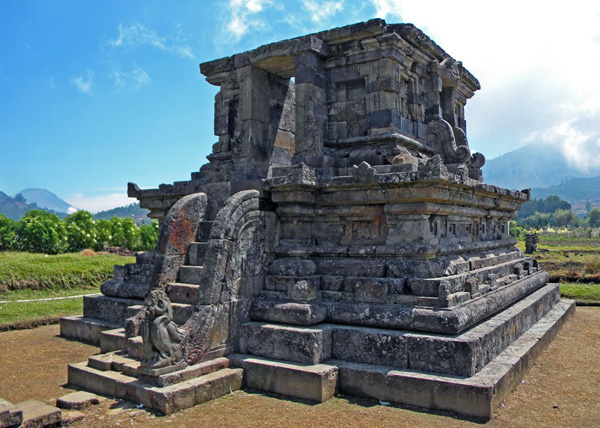 The fact is Dieng Plateau has several complexes of temples. One of them is Gatotkaca complex, consisting of 5 stunning temples. Well, let’s talk about one of those structures. It is Setyaki – a mesmerizing temple with an open roof. Unlike other temples, it provides an opportunity to tourists to peek inside the structure from above. According to the locals, that structure was once a residence or resting place, used by the natives. Thanks to those unique traits of the temple. Setyaki has become a prime structure to visit in Dieng Plateau.

The Nuance
Some stones are scattered on the site, implying the local government has not been done with its renovation. Despite the condition, it still has a captivating charm that no one can deny. The name even means something special, which is one of the characters in shadow puppets story – Setyaki. It is the name of a powerful and smart hero, who loves liquor! That habit, drinking liquor, even led him to death during Gada War. Knowing the bravery and peculiarity of that legendary man, the locals decided to use the name as one of the temples that reside in Gatotkaca complex.

Exploring Setyaki Temple
It is fun spending a vacation in Setyaki Temple. One of the reasons is the presence of local potato plantation and savanna, which can be seen all the way to the site. That means it becomes an interesting trekking activity for visitors. Such lonely temple even features flawless scenery like hills and trees. This explains why sightseeing becomes a recommended activity to do on the site. There is even no need to hire a local guide, as the route to the site is easy.

The next attraction in Setyaki Temple is Batu Umpak-Umpak, residing in the north part of the site. The rumor has it. The structure was used as a Darmasala or a short-term resting place. There is also Lingga Patok, which is located in the midst of local farms. It was used as a stake of Perdikan land back then. All of them have a unique shape and historical value, so it is common to see historians or researchers in those sites. It is the same for tourists. They can explore those sites, take pictures, and learn the history. Therefore, it is highly recommended to carry a camera.

Another important thing to know is that there are other names like Nala Gareng, Sadewa, Nakula, Antareja, and Petruk Temple. They are located in the same area as Setyaki, but their condition is terrible. In fact, they are unidentifiable! This is why tourists can only recognize a single temple in that location. It is because the others have turned into small stones, scattered all over the ground. Their names remain known by the locals, though.

How to Get There
As mentioned before, Setyaki Temple belongs to Gatotkaca complex and it is located in Dieng Kulon Village, Batur. From Wonosobo City, tourists can simply take a bus and head to the site. The entrance is located in Arjuna Temple complex, actually. From there, visitors only need to walk a route of 200 meters. As an alternative, tourists can use a route that passes through local potato plantation.