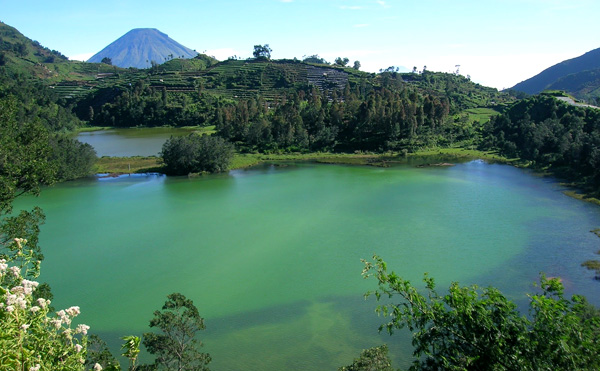 All travelers should go to Dieng Plateau at least once. The site offers lucrative stunning nature attractions, especially lakes and mountains. Residing by Warna Lake, there is a pristine tourist spot called Pengilon Lake. Both of them belong to Dieng Wetan Village, though. Pengilon means “Bercermin” (reflecting). It is because the lake water is quite clear, so people can see their reflection well on it. Apart from its mesmerizing beauty, the site also becomes a good spot for witnessing Pacific Black Duck or Mliwis. These birds are seen flying and playing around in the location, so tourists can observe them wholeheartedly.

The Nuance
Pangilon Lake is surrounded by hills and lush nature, including dense trees. The most common species are the acacia trees and they grow abundantly there. Not to mention several local farms are also seen near to the lake. The lake also becomes a resting point for hikers who return from either Sikunir or Prau Mountain. Featuring fresh air and comforting nuance, no one can deny the charm of the lake. Above all, the lake water is quite mesmerizing, displaying purity and small fishes to tourists.

Exploring Pengilon Lake
Pengilon and Warna Lake is an inseparable combination. That means visitors should never miss any of them. For those who look for a calmer and fresher nuance, Pangilon is considered a better choice, though. The lake also becomes an important water supply and irrigation for nearby villages, especially Jojogan. This explains why tourists can easily meet the locals when exploring the lake. Have no worries. They are friendly, so everyone can approach them easily. Some of them even might invite lucky tourists to visit their house and offer local delicious local foods!

The rumor has it Pengilon Lake has a mystical power. As stated before, the name means “the reflection”. People with a pure and good heart would be able to see a beautiful reflection of their self. On the other hand, they might see the unpleasant reflection if they have a bad personality. Due to this legend, the locals take advantage of the lake to be a better person. It is true not all tourists believe such kind of thing, but they won’t miss the chance to see their reflection on the lake. There is nothing to lose, after all.

There is another adventure to do in Pengilon Lake. It is a small trekking to nearby caves, which features an easy route and beautiful landscape. Once they pass through the main landmark, Semar Statue, they are ready to enter the caves! The thing is no one is allowed to take pictures once they enter such area. The rumor says there were some people doing photography in that sacred area and they was never able to go back. They vanished!

How to Get There
Pangilon Lake resides in a secluded area, so it takes a bit effort to reach it. There are two routes available, which are through Jojogan Village and the entry Point of Warna Lake. Both of the routes share the same distance, after all. Tourists only need to spend 30 minutes to reach the lake.