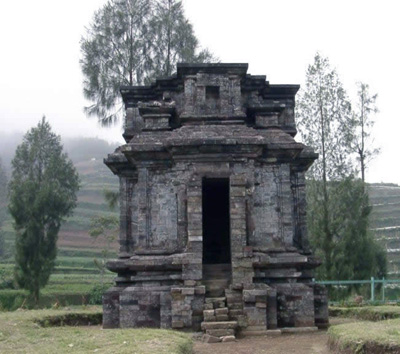 The presence of Dwarawati Temple is not as well-known as Arjuna or Gatotkaca. It is also true that location is a bit secluded and it has not many visitors as temples that reside in other complexes. Despite the facts, the temple belongs to Dieng Plateau and becomes a distinct tourist spot in Dieng Kulon Village. The fact is there was a complex of temples, consisting of Dwarawati, Margasari, and Pandu. However, only one of them survived, which is none other than the temple described here. Not many travelers have heard about it, but everyone should visit it sometimes.

The Nuance
The size of Dwarawati temple is not quite big. It has the width of 4 meters and the length of 5 meters. Also, it has the height of 6 meters. The roof features unique carvings and its outer wall has a hollow part called niche. There was supposed some arcas in it, including Goddess Durga, Agastya, and Ganesha. Unfortunately, those items had been relocated somewhere. Rumor has it those arcas were either stolen by bad people or moved to Kailasa Museum. That means visitors can only witness an empty niche when visiting the temple.

Exploring Dwarawati Temple
Dwarawati Temple is included in the list of Dieng Plateau’s recommended tourist spots despite its unpopularity. The locals say it will be a waste to leave such historical site neglected. The nuance is desolated and there is no guard at all. Knowing the fact, visitors should take advantage of such peaceful nuance for relaxing. Moreover, it is surrounded by local farms and hills! Not to mention fresh air and mesmerizing nature scenery are quite satisfying. Somehow, the site becomes a perfect spot for relaxation.

The nuance in Dwarawati Temple is good despite its secluded location. Apart from enjoying the nature, visitors should take some pictures in front of the temple and share them on social media sites. It is a small act, but it helps to promote the temple to others. Hopefully, more people are aware of Dwarawati and drop by during a vacation in Dieng Plateau. The local government also needs to do more efforts in improving its facilities. For instance, they must install information boards regarding the history of the structure.

In a nutshell, Dwarawati Temple had the same role to others, which were the place to worshiping Hindu’s God called Shiva. Those temples were built around the 8th – 9th century and they are considered the oldest in Java Island. Dwarawati is not as popular as others, but it owns some specialties. It includes the location, which is near to Prau Mountain slope. No wonder, tourists can directly head to nearby trekking point and climb such gorgeous peak.

How to Get There
Dwarawati Temple resides in Dieng Kulon Village, Batur. It takes about 1-2 hours to reach it from Wonosobo City. Travelers can take a bus and use Dieng Raya Street to get to Batur. After arriving at the village, they need to do a small trekking to reach the temple. This includes passing through local’s potato farms.