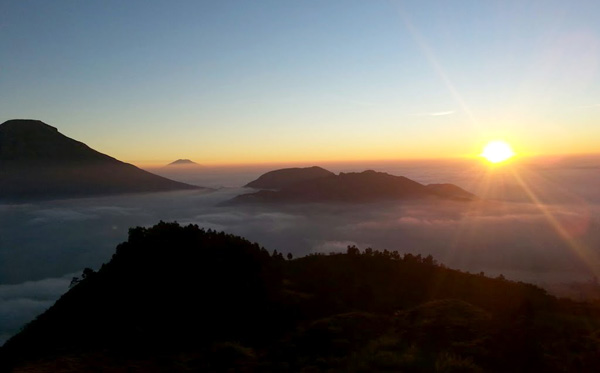 A majestic mountain resides in Dieng Plateau and belongs to Kejajar Sub-District. The name is Sikudi Mountain. The location is near to Seroja Valley and it often becomes a site for hiking, photography, and sightseeing. To be exact, it resides near to Kreo Village. Unlike other mountains in Dieng, Sikudi has a special trekking route with its lush nature and beautiful views! Even though tourists must spend much time to reach the top of the mountain, they won’t be disappointed later. Being one of the best locations to enjoy trekking, Sikudi has become a favorite tourist spot in Dieng, especially for those who love an adventure.

The Nuance
The trekking route in Sikudi Mountain provides various features, including nature views, lush trees, and its sloping land. It resides on 1800 meters above the sea level, after all. From the top of the mountain, visitors can witness a stunning nearby tourist object like Menjer Lake. For those who don’t have enough stamina to reach the top of Sikudi, they can simply reach its valley (Seroja Valley). The views are also great from there. Another important feature that resides in the top of the mountain is its viewing post, which is called “Gubug Pandang”. It is the best spot to capture beautiful pictures, actually.

Exploring Sikudi Mountain
It is without a doubt most of the tourists come to Sikudi Mountain to do trekking. They want to experience the challenges and witness amazing views of the mountain. It takes about 2-3 hours to reach the top of it, depending on the stamina and experience. For beginners, it is better to come with a local guide as this person may help them to choose the right route, which is considered more efficient and safer. For first times, usually, the trip may take about 4 hours. It is because they are likely to take more rest than professional hikers.

Before hiking, tourists must gather in the basecamp and but the ticket there. Have no worries. It is quite cheap! Another expense is required for those who park their vehicle in that area. The basecamp also becomes a place to find a tour guide, actually. Not to mention visitors can prepare some items to carry for trekking, including foods, medicine, trekking gear, etc. It is going to be a long and tiring trip, so everyone should be well-prepared.

Once enjoy trekking in Sikudi Mountain, the next thing to do is to visit other attractions that also reside in Kreo Village. For instance, there is Syech Karim Tomb, a founder of Wonosobo City. Another interesting vacation spot to visit is Serayu Dam. It is the place to witness beautiful flows of Serayu River while enjoying a fresh drink! Some people also use the location for rester after conduct trekking in Sikudi earlier.

How to Get There
As mentioned before, Sikudi Mountain resides near to Kreo Village in Kejajar Sub-District. For those coming from Wonosobo, they may take 1 hour to get there. Once they reach Kreo, their next destination is the basecamp, where tourists can prepare before trekking.