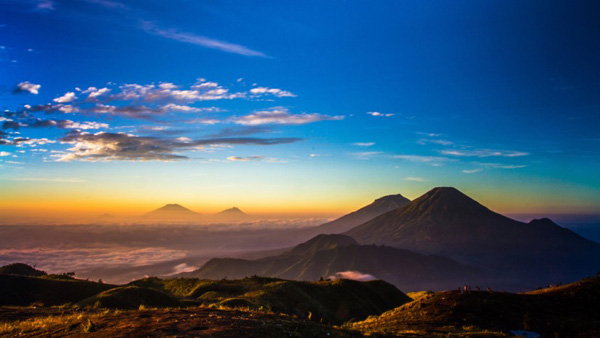 What makes Dieng Plateau famous? This is an easy question. The answer is definitely its mesmerizing nature landscapes and attractions. Regarded as the best vacation destination in Banjarnegara and Wonosobo, Dieng keeps emitting its charm. Here is a reference. The name is Prau Mountain – a nice destination for those who love hiking and sightseeing. The mountain belongs to 4 different districts, which are Kendal, Wonosobo, and Banjarnegara, and Batang. Despite its moderate size and simple trekking route, Prau has been chosen as tourists’ favorite spot for hiking and nature exploration. Not to miss are its stunning sunset and sunrise views!

The Nuance
The main objective in visiting Prau Mountain is to reach its peak, but most of the hikers weren’t able to achieve such goal. It is because hikers may face more difficult route to reach the top of the mountain. No wonder, most of them could only reach the campsite, which is the most popular checkpoint in Prau. Here is an important fact. The temperature is quite cold up there, even during summer. In the morning, in fact, some ice crystals are formed! Also, some parts of the hills feature mesmerizing flowers like edelweiss.

Exploring Prau Mountain
Hiking is popular in Prau Mountain. In fact, this is the reason why Prau is famous amongst tourists. Moreover, it provides two different routes for trekking and the mountain feature several monitoring posts. The first route is called the north path, which is located in Kendal District. To be exact, the location is in Kenjuran Village. Those who use this route may spend roughly 6 hours to reach the campsite. Another fact is that the route is a bit steep, but it features stunning nature views.

The second hiking route is called the south path. It is more crowded than the north path because it is located near to Dieng Plateau. The starting point resides in Patak Banteng Village, featuring easier landscapes and better atmosphere. Not to mention it is considered faster than the other route. Hikers only need to spend about 3 hours to reach the campsite. Along the way to Prau Mountain, some monitoring posts are seen, so hikers can take a rest for a while before continuing their adventure. Even each of the posts has some staffs that are always ready to help.

On the campsite, hikers can enjoy numerous activities, including sightseeing and camping. The number of visitors is many, as the site is quite popular. From that location, they might be able to enjoy stunning views of sunset and sunrise, as well. Here is the tip. The best time to visit the mountain is between December and January when the sunrise appears more beautiful with its soothing color.

How to Get There
The distance between Wonosobo City and Prau Mountain is 24.2 km. That means the trip may take about 50 minutes. The best spot to start trekking is Patak Banteng Village, which is the one called the south route.