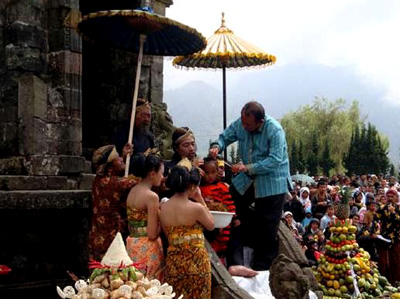 Dieng Culture Festival is none other than a primary attraction that tourists must not miss when visiting Wonosobo District. Such big event features many attractions for tourists to enjoy. Well, one of them is called “Ruwatan Rambut Gimbal” (dreadlocks sanctification ritual). It is done to local kids who have dreadlocks in order to eradicate bad lucks and prevent any misfortunes. This sacred event not only attracts local people but it also becomes a lure for tourists. Usually, the ritual is done in several locations near to Sindoro and Sumbing Mountain, during Dieng Culture Festival.

About Dreadlocks Sanctification Ritual
What does it mean? Dreadlocks sanctification ritual means to shave the hair of the local kids who have it. Only a chosen person is allowed to shave the hair of those kids, though. Also, there are different versions regarding the origin of kids with dreadlocks. For example, these kids belong to Kolodete, the founder of Wonosobo City. It is said he also had dreadlocks hair back then. Another story tells that Kolodete was once a local hero with dreadlocks. He felt bothered with his hair during the war so he entrusted it to local kids.

Witnessing Dreadlocks Sanctification Ritual
So, how is it done? The main purpose of the ritual is to eradicate bad luck by shaving the dreadlocks of the local kids. However, some requirements need to be done before the procession. For example, the kids can make some demands before getting the sanctification. That means all of their wishes must be granted like toys, bikes, etc. If not, the ritual becomes a waste as the dreadlocks may regrow in the near future. No one can explain why those wishes relate to the success or failure of the ritual, though.

For tourists, dreadlocks sanctification ritual becomes a unique attraction in Dieng. It is not even difficult to witness it because the locals often conduct it massively (done to more than one kid). The best area to witness the ritual is definitely in Dieng Plateau, where the culture festival is held. Some other areas also often hold the ritual, which are Cebong Lake, Cave Complex, Pengilon Lake, Warna Lake, and Arjuna Temple Complex. Those are good alternatives to enjoy the event.

It is true dreadlocks sanctification ritual is not only available during Dieng Culture Festival because the locals also often conduct it in their house. That means villagers are allowed to hold a private ritual for their kid, without any presence of others or tourists. However, some people say it won’t work well if it is done privately. No wonder, more people choose to do it along with others when in an open place. It helps them to attract more tourists to visit Dieng, after all.

How to Get There
It is recommended to come during Dieng Culture Festival in Wonosobo. For outsiders, they can take a bus and head to either Sawangan or Mendolo Bus Station. Next, they need to take a minibus to Arjuna Temple Complex, where the festival is held.