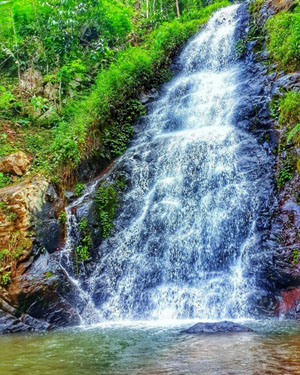 Everyone should be aware of numerous references of waterfalls located near to Dieng Plateau. Here is an example. The name is Pitu Waterfall or Curug Pitu, which resides in Sigaluh Sub-District. To be exact, the location is in Kemiri Village. The name derives from the local language, consisting of words Curug (waterfall) and Pitu (seven). As the name suggests, there are 7 levels of falls, on which tourists can explore. Due to its unspoiled nature, it becomes tourists’ favorite places to relax and enjoy peaceful nuance. Some locals also come to the site to get in the nature pond and take a bath in it.

The Nuance
Those seven levels of falls are explorable so visitors can even climb on it. The thing is it takes a bit trekking on a small path in order to reach the top of the falls. From above, the views are better for sure. The lowest level of Pitu Waterfall has the swiftest flow, having the height of 30 meters. It also features nature pond, on which people can get in and take a bath. When it comes to the environment, the waterfall offers a peaceful and relaxing nuance. Those who love serene nature should visit Curug Pitu for sure.

Exploring Pitu Waterfall
The first level of Pitu Waterfall is considered the most popular one. Thanks to its swift water and nearby lush nature. Many plants and trees are seen in that location as well, including Durian trees. For those who want to explore the other levels, they can use available footpath that is available in the right part of the waterfall. The route is a bit challenging so it is better to wear comfortable footwear when exploring the site. The thing is the path is quite slippery so everyone should be careful when stepping on it.

In the 4th level of Pitu Waterfall, the landscape is not quite sloping and the water isn’t as swift as those of the bottom levels. It also becomes the best location to rest before going further up to the top of the waterfall. It is going to be a tiring but worthy effort. Later, tourists can rest in nearby facilities like toilets and eateries despite the humble condition. Hopefully, the local government put more efforts in improving its quality. The purpose is definitely to attract more visitors to the waterfall.

After enjoying an adventure in Pitu Waterfall, it is time to buy some souvenirs. The most recommended one is local durian! Several durian plantations are available near to the waterfall so it is easy to get one. Not to mention the price is cheaper, especially for those who are able to bargain. Another recommendation is Combro Kalipalet, which is both spicy and salty.

How to Get There
As mentioned before, the falls reside in Sigaluh Sub-District. From Banjarnegara City, the distance is only 10 km. That means tourists only need to spend about 10-15 minutes to reach the site. Once their reach Tekidadi Street T-Junction, they might have noticed the signboard of that tourist site.