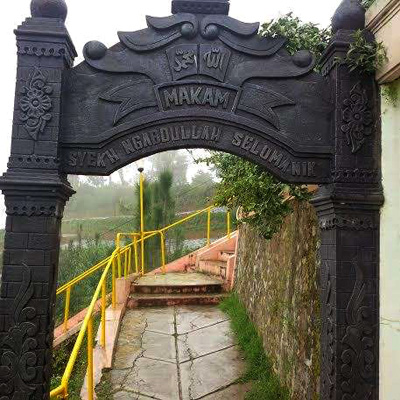 Pilgrimage tour becomes an option for those who visit a famous tourist site like Dieng Plateau. The reason is none other than the presence of several sacred sites, which scatter in different areas. For example, there is Ngabdullah Selomanik Tomb in Kalilembu Village. It is the tomb of a syech, the son of King Brawijaya 5th of Majapahit Kingdom. That man was also recognized for his role in introducing Islam to Dieng Plateau and nearby area. Since his tomb was founded by Gus Dur, a former president of Indonesia, it keeps attracting more visitors over time.

The Nuance
In order to reach the site, tourists must conduct a short trekking from Kalilembu. The fact is visitors must pass through the local settlement and climb the stairs. Once they reach the gate, they can see a majestic structure where a big tomb resides. It is covered with a valance, as well. Before entering the site, it is recommended to take Wudhu (Islamic cleansing ritual using water). Visitors also need to enter the structure based on their gender, actually. There is even a small mosque or mushalla there, on which visitors can pray.

Exploring Ngabdullah Selomanik Tomb
The first reason to visit the tomb is to learn a bit history of that syech. It is said he is the line of Ample Sunan. Not to mention his tomb was Gus Dur’s favorite place for pilgrimage. This explains why the site is quite popular among the locals. The fact is some outsiders are often seen there as well, especially in January during the “haul” (birthday) of Ngabdullah Selomanik. People give a prayer and look for a blessing from the God through that sacred site. Sometimes, politicians also come to the tomb because they believe it may give good luck in the future election.

Other than January, the tomb seems quieter and more peaceful. Only some local kids are seen in the stairs near to the site. There is no keeper so visitors are allowed to enter and give a prayer solemnly. The thing is they must give respect to the site by taking wudhu before entering. Also, littering is a big no. All tourists must take care of the environment and must not eat foods or drink near to the tomb. Also, no one is allowed to talk loudly in that area.

Before going back to Kalilembu Village, tourists must take advantage of the nature to relax and rest for a while. It is because the tomb resides in a highland, featuring breathtaking views of Menjer and Cebong Lake. From there, they can even access to nearby villages such as Sembungan and Mlandi.

How to Get There
The distance between Wonosobo City and Selomanik Tomb is roughly 26 km. That means it costs about 1 hour to get to the location. Once they reach Siton Gate, they can access to Kalilembu Village, where the tomb is located. Have no worries. The locals are ready to help by giving direction.