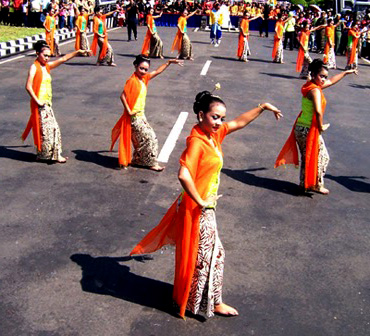 Becoming one of signature traditional dances of Central Java Province, Lengger Dance remains popular among both locals and foreigners. One of the best locations to witness the dance is in Dieng Plateau, especially during special events. Lengger is performed in pairs and it has become traditional entertainment for decades. No one can deny the beauty of such classic dance for sure. The name “Lengger” derives from Le, which means boys, and “Ger” which means festive. It was performed differently, though, back then. In the past, the dance was a little bit erotic and often caused havoc. Today, however, the dance has become more meaningful and beautiful.

About Lengger Dance
As mentioned before, the dance is performed in pairs. That means there are both female and male dancers. The women wear traditional fabrics like Jarik and Kemben. Not to mention they wear several accessories, especially a crown and a shawl. The fact is that they also put some makeup to look more beautiful during the performance. For male dancers, they wear simple attire with a vest. When it comes to accessories, they wear a mask and a headband. The dance also has an accompaniment, actually. These include traditional music instruments like gong, kendang, gambang, saron, and calung.

Enjoying Lengger Dance
Even though Lengger Dance has been performed in several regions in Central Java Province, Wonosobo and Dieng Plateau are considered the best place to enjoy it. No wonder, those who visit Dieng would try to witness the performance with their own eyes. There are several stages performed during dancing and all of them represent a significant meaning. Thanks to Kalijaga. He had turned Lengger into a better dance by involving a religious aspect in it. The reason is because the dance was considered lustful back then.

People who live in Dieng and nearby areas often conduct the dance during a special event called “Hajatan”. For tourists, it is a bit troublesome to enjoy the dance as they must come at the right time. Have no worries. Local tour guides or tour agents would arrange it for clients. That means tourists can simply contact those people in order to take an opportunity to witness Lengger Dance in Dieng. The best location to enjoy the performance is in Giyanti Village, actually. It resides in Solomerto Sub-District and belongs to Wonosobo District.

As for the tips, tourists must never forget to carry a camera. Beautiful moves and expressions showed by the dancers are quite mesmerizing, after all. Somehow, it becomes a wonderful object for photography. Another tip is that tourists should come with a local tour guide as he may explain the meaning of the dance and its history. It is true it costs some money but it is worth the expense.

How to Get There
The most recommended location to enjoy Lengger Dance is in Giyanti Village. From Wonosobo City, travelers can simply head to Selomerto Sub-District, which takes about 20-30 minutes. The distance is 10 km and they can take Banjarnegara-Wonosobo Street.