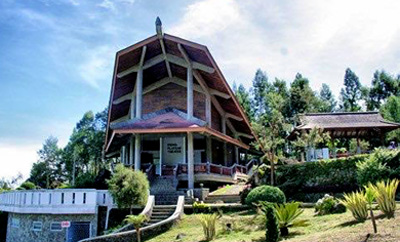 Dieng Plateau belongs to both Banjarnegara and Wonosobo District. Regardless of the location from where tourists come, lots of tourist spots are waiting for them. Here is a reference. The name is Dieng Plateau Theater in Kejajar Sub-District. It belongs to Wonosobo District, actually. Unlike other vacation destinations in Dieng, it is man-made. That means the local government constructed such theater as an extra lure there. It is the place to watch a documentary film regarding Dieng Plateau, including culture, history, potentials, and natural events. No wonder, it is a suitable place to learn more about that stunning plateau along with its mysteries.

The Nuance
Dieng Plateau Theater resides on 2100 meters above sea level and it is located on the slope of Sikendil Hill. It is also situated near to the T-junction entrance of Dieng Plateau, which is 150 meters from a famous lake called Warna. The fact is the theater offers an entrance to such lake and another famous tourist spot – Ratapan Angin. The building has a majestic design, featuring a beautiful garden and good facilities. It can even accommodate up to 100 visitors. Not to mention it is equipped with sophisticated audio and visual facilities.

Exploring Dieng Plateau Theater
Before entering the building and watching the documentary film, tourists can enjoy stunning views of nature in that area. Thanks to the location. Visitors are able to see majestic mountains out there, including Gajah Mungkur, Prau, Pangonan, Sipandu, Nagasari, and much more! Near to the parking area, visitors can relax while enjoying nature scenery in a small garden. It is even allowed to eat snacks or foods at that spot. At least, they can rest awhile after a long trip to the theater.

Now, it is time to enjoy the main attraction of the theater, which is a documentary film entitled “Bumi Kahyangan”. The duration is about 30 minutes and it tells the story about Dieng Plateau’s history, culture, geographical condition, and others. This is suitable for everyone, including tourists, students, and historians. No wonder, families with kids often come to the theater and enjoy such visual information. Inside the building, there are about 60 seats. Not to mention there is a big screen, having the size of 2 x 3 meters. What a great place!

After watching the film, the next activity is photography. Taking selca in front of the theater building is a must, after all. Next, it is time to reach other stunning attractions nearby. So, it is better to come with a tour guide for a better tour. As for the tip, the theater opens from 7 am – 6 pm. It is possible to come earlier or later than that, but tourists must have made an appointment with the keepers.

How to Get There
From Wonosobo City, a trip to Kejajar Sub-district takes about 50 minutes and the distance is 19 km. The fastest route is definitely Raya Dieng Street. As for the medium, travelers can ride either a private car or public transportation service.